Woooohooooo!  Another comment from an author...this time it's from Amy Reed, author of Crazy, which is the book on which Kailey based her project.

Last week in Mrs. Custer's high school English classes, students presented projects on books they had read.    We posted them on the library's Facebook page, and Jo Knowles, the author of Kacee's book, Pearl, commented!

The Project:
The Comments!!

And if you want to see that book trailer Kacee created when she was TWELVE:

Forget Me Not, by Carolee Dean 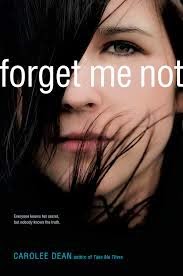 This book was part of my latest order for the high school library, and I grabbed it, along with about a dozen other books to read this summer.  I must admit, this one was definitely not what I expected it to be!  That's not to say I didn't like the book --  I  just didn't get swept away by it until a little more than halfway through.  That's when the metaphorical light bulbs went off in my head as I "got it" and the action picked up. (OK sometimes I'm slow!)   The last hundred pages were a frantic, fast-paced race for me, with the pages turning rapidly in my quest to see where things would end up.

Forget Me Not is written in verse, and it focuses on two main characters: Ally and Elijah.  The book opens with Ally in a dark hallway in an abandoned wing of her high school.  She is hiding out because a scandalous photo of her has gone viral and her reputation has taken a major nose-dive. With the single click of a "send" button, she has gone from an up and coming freshman girl on the cusp of major popularity, to a whore--a girl that "wants to sleep with the entire football team."  Everything is so convoluted and upside-down that she can't imagine ever facing anyone again.  So she hides....or at least, that's what it seems like she'd doing...until things get very weird in that hallway, and she realizes that she's not hiding there--she's there for an entirely different reason

Elijah has also spent some time in that same dark hallway in the same abandoned wing of the high school, after trying to kill himself by overdosing on pills.  His mission has a singular focus:  Get Ally out of that hallway at any cost.

Ally finds herself with the biggest decision of her mortal--and immortal, life.  She has to decide whether she lives.  Or dies. And her time to make that decision is limited.

Fans of If I Stay, by Gayle Forman will undoubtedly be drawn to this one, as the main premise is similar.  (Think comatose patient forced to make a choice)

I have to be honest and say that I was far more impressed with the quality of writing than I was with the storyline. I especially enjoyed reading the author's notes at the end, describing the different poetry styles used in different parts of the book.  That being said, I would definitely recommend this book to many of my students--especially fans of (paranormal) novels in verse.
Posted by Mrs. Schauer at 7/03/2014 09:25:00 PM No comments:

PHS Library | Promote Your Page Too

1. Click on the "Comments tab at the bottom of the entry you would like to add to.

2. Type in your comments.

7. As soon as Mrs. Schauer approves the comment, it will be published.

8. To view all the comments in one window, go back to the main blog page and click on the title of the blog you want to view. For example, to read the comments on "Remembering JD," click on that title.

All entries on this blog are licensed under the following: